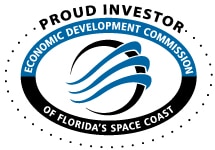 In August 2006, Kevin Gholston joined the Economic Development Commission of Florida’s Space Coast as an investor.  His first assignment was to chair the Industry Advisory Council leading its initiative to reach Brevard Public Schools High School Children to educate them on careers in manufacturing.  In 2009 he transferred to Chair the Ad Valorem Tax Abatement Council.

During his tenure, the committee has reviewed over 50 applications for expansion or relocation, fulfilling the State of Florida statutory requirement as the citizen board to review and recommend to the Brevard County Commission.

The Brevard County Commision was reviewing its relationship with the EDC in the spring of 2010, and Kevin assisted the effort to show the business community support for the EDC.  This is when he gave his “Pennies” Speech to the Commissioners, and a portion of this speech is shown in the attached video.  It was all about a mason jar of pennies and the total number of pennies: 268 ($2.68).

Kevin explained that this was what each citizen’s contribution was through the Brevard County Commission annually.  He believe it was worth it and should be continued.  Kevin Gholston received the EDC Volunteer of the Year Award 2010 for the Economic Development Commission of Florida’s Space Coast in 2010 for his dedication and hard work supporting economic development in Brevard County, Florida.

Kevin is Vice President of CVG Strategy, a consultancy that helps local businesses reach their potential.  They provide expertise in Quality Management Systems, Product Test and Evaluation, Export Compliance, and Cybersecurity.  Kevin has been instrumental in bringing his skills to work by consistently adding value to his customers.  This dedication to excellence has been the trademark of companies he has worked with in Florida and beyond.